The world’s biggest lockdown that shut a majority of the factories and businesses, suspended flights, stopped trains and restricted movement of vehicles and people, may have cost the Indian economy Rs 7-8 lakh crore during the 21-day period, analysts and industry bodies said.

With the intent to contain the spread of Covid-19, Prime Minister Narendra Modi with effect from March 25 announced a nationwide complete lockdown that brought as much as 70 per cent of economic activity, investment, exports and discretionary consumption to a standstill. Only essential goods and services such as agriculture, mining, utility services, some financial and IT services and public services were allowed to operate.

Stating that the pandemic came at the most inopportune time for India whose economy was showing signs of recovery after bold fiscal/monetary measures, Centrum Institutional Research said the country again stares at the possibility of low single-digit growth for FY2021 (April 2020 to March 2021).

“Nationwide complete lockdown is likely to shave off at least Rs 7-8 trillion,” it said.

Acuite Ratings & Research Ltd earlier this month estimated that the lockdown will cost the Indian economy almost $4.64 billion (over Rs 35,000 crore) every day and the entire 21-day lockdown will result in a GDP loss of almost USD 98 billion (about Rs 7.5 lakh crore).

The rapid spread of Covid-19 has not only disrupted the global economy but also triggered a partial shutdown in many parts of India from early March and an almost complete shutdown from March 25.

“While the countrywide shutdown is scheduled to be lifted from April 15, 2020, the risks of prolonged disruption in economic activities exist depending on the intensity of the outbreak,” the credit rating agency said.

The sectors that are most severely impacted are transport, hotel, restaurant, and real estate activities.

Prime Minister Modi is likely to detail the post-lockdown scenario in an address to the nation on Tuesday morning.

All India Motor Transport Congress (AIMTC) secretary-general Naveen Gupta said the accumulated losses to truckers during the first 15 days of lockdown were about Rs 35,200 crore given an average Rs 2,200 loss to per truck per day.

“More than 90 per cent of the about one crore trucks in the country are off roads during the lockdown as truckers with only essential commodities are on the move,” he said. “Even if the lockdown is lifted, it will take at least 2 to 3 months for truckers to limp to some normal scale as we apprehend consumption of non-essential items to remain hit on the account of lack of purchasing power.”

AIMTC represents about 93 lakh transporters and truckers and is their umbrella body.

National Real Estate Development Council – a body of realtors, puts the loss in the sector at Rs 1 lakh crore.

“I am scared to estimate what the losses would be. I think, a potential loss of maybe Rs 1 lakh crore on a conservative basis on an all India basis. It is a conservative figure. I cannot think of the upper end of the figure… Based on thumb rule, at least Rs 1 lakh crore,” said its president Niranjan Hiranandani.

The Confederation of All India Traders estimates that the losses incurred by the retail trade of the country in the second half of March due to the Covid-19 pandemic were a massive $30 billion.

A host of international agencies have cut India’s economic growth estimate for FY21 on concerns about the fallout of Covid-19 outbreak.

World Bank on Sunday said India’s economy is expected to grow 1.5 per cent to 2.8 per cent in 2020-21 fiscal which started on April 1. This will be the slowest growth rate recorded since the economic reforms of 1991.

Asian Development Bank (ADB) sees India’s economic growth slipping to 4% in FY21, while S&P Global Ratings has further slashed its GDP growth forecast for the country to 3.5 per cent from a previous downgrade of 5.2 per cent.

Fitch Ratings puts its estimate for India growth at 2 per cent while India Ratings & Research has revised its FY21 forecast to 3.6 per cent from 5.5 per cent earlier.

Moody’s Investors Service has slashed its estimate of India’s GDP growth during the 2020 calendar year to 2.5 per cent, from an earlier estimate of 5.3 per cent and said the coronavirus pandemic will cause unprecedented shock to the global economy.

Acuite Ratings believes there is a risk of a contraction of April-June (2020-21 fiscal) GDP to the extent of 5-6 per cent, with Q2 (July-September) also likely to post modest growth in a best-case scenario.

It expects the overall GDP growth for 2020-21 to be in the band of 2-3 per cent which takes into account a significant economic revival in the second half of the financial year.

“We have cut our GDP estimates for FY21 from 5.2 per cent to 3.1 per cent and believe that too will be back-ended,” Centrum Institutional Research said. 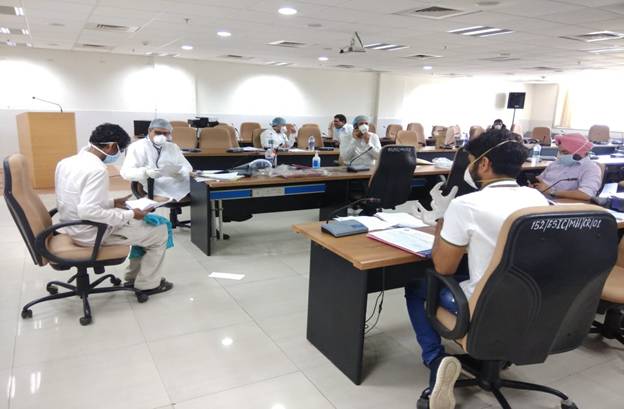